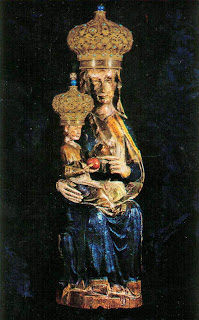 The Shrine of Our Lady at Mariazell is about 85 miles from Vienna. Its beginning is fairly well dated as 1157, at which time five Benedictine missionaries had been sent out to the surrounding country. One lost his way in the woods near Graz, and night found him facing a high bare rock which he could neither climb nor go around. He carried with him a wooden statue of our Lady about two feet high which he intended to use in his missionary labors. This he placed on a log while he prayed to Our Lady for direction. The high black rock suddlenly split in two and light shone forth from its severed edges. He realized that Our Lady had led him there and that she wished to be honored in this place.
At first he built only a tiny hermitage, with a tree-stump for a pedestal to hold the statue. More than a hundred years later, a neighboring prince and his wife, both seriously ill, were told in a dream to go to the hermitage and pray to Our Lady for a cure. Being cured, they built a church as a thanks-offering. In 1363, Ludwig, King of Hungary, added to this church in thanksgiving for a miraculous escape from the Turks. By 1699 the church had been enlarged still more and was visited by up to 370,000 pilgrims a year. Its popularity as a pilgrimage place was so great that a later emperor, who had ruthlessly suppressed all the monasteries, refused to strip the sanctuary of Mariazell of its many treasures.
The statue, carved of wood, is seated. Our Lady's dress was originally white with gold patterns, the mantle blue, and she wore a white linen veil. The Babe holds an apple. His mother, a pear. Our lady looks out and beyond the Infant with a regal and somewhat sorrowful expression. The statue is now completey robed in costly materials.
At the feet of Our Lady at Mariazell, patroness of Styria, four warring peoples come to pray -- Germans, Slavs, Hungarians, and Bohemians.
Wars, invasions and even a disastrous fire that destroyed the entire church have never scarred the statue nor stopped the pilgrimages to Mariazell.